GENEVA, June 17 (Xinhua) -- The Human Right Council on Wednesday afternoon began an urgent debate on current racially inspired human rights violations, systemic racism, police brutality and violence against peaceful protests, in the follow-up to the killing of George Floyd in the United States.

In her opening remarks, Elisabeth Tichy-Fisslberger, President of the UN Human Rights Council, said that the debate was being held at the request of Burkina Faso on behalf of the African Group.

She bowed to all the victims and requested those present to observe a moment of silence at the beginning of the debate. 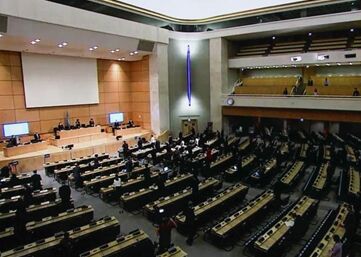 On May 25, Floyd, a 46-year-old African American, was killed by police in Minneapolis, Minnesota, during an arrest for allegedly using a counterfeit bill.

Amina Mohammed, deputy Secretary-General of the United Nations, via video teleconference, said that the debate is a "historic debate," given that Afro-descendants still faced poverty and structural racism.

"I too, like Martin Luther King Jr, have a dream that my granddaughter Maya will grow up in a world where she will not be judged by the color of her skin but by the strength of her character," she said.

Michelle Bachelet, United Nations High Commissioner for Human Rights, emphasized that the wave of protests since the killing of George Floyd had been truly global, and encouraged the Council to heighten its focus on racism and racial discrimination.

Saying that George Floyd's killing has become emblematic of the excessive use of disproportionate force by law enforcement against people of African descent, the High Commissioner said that decisive action is needed not only to reform law enforcement agencies, but also to address pervasive racism problems.

E. Tendayi Achiume, UN Special Rapporteur on racism, told the debate via video message that the world is witnessing the largest transnational mobilization against systemic racism in law enforcement sparked by the chilling images of the police killing of George Floyd.

On behalf of a group of other UN experts, she also urged the UN rights body to create an international commission of inquiry with the necessary authority to investigate systemic racism in law enforcement in the United States.

Philonise Floyd, brother of George Floyd, said via video message that none of the police officers were fired for his brother's murder until mass protests took place worldwide.

He requested the establishment of an independent commission of inquiry to investigate police killings of black people in America and the violence used against peaceful protesters.

In the discussion that followed, speakers thanked the African Group for putting this important topic on the agenda and strongly condemned the murder of George Floyd and all forms of racism, xenophobia and discrimination.

Many speakers also expressed concern about the increased use of the mass media to transmit racism, xenophobia and racist discrimination, calling for the promotion of education and mutual understanding between communities.

Given the large number of speakers, the urgent debate will resume on Thursday morning, at the end of which a resolution is expected to be adopted.