MOSCOW, June 16 (Xinhua) -- The U.S. attempts to force Iran nuclear deal participants to renounce their obligations and to punish Tehran by illegitimate initiatives, including the arms embargo, have no prospects from the point of view of international law, Russian Foreign Minister Sergei Lavrov said Tuesday.

"We will use all the opportunities this international law provides to make sure that justice is served," Lavrov said during a news conference following talks with his Iranian counterpart Mohammad Javad Zarif.

The Iran nuclear deal, or the Joint Comprehensive Plan of Action (JCPOA), was reached in 2015 between Iran and the P5+1, which is the five permanent members of the United Nations Security Council -- the United States, Britain, Russia, France, China, plus Germany -- plus the European Union. 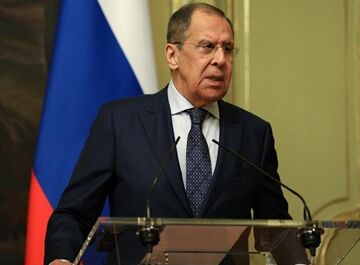 Tehran agreed to roll back parts of its nuclear weapons program in exchange for decreased economic sanctions.

In May 2018, the United States announced a unilateral withdrawal from the deal and the restoration of stringent sanctions against the Islamic republic.

In reaction to the U.S. withdrawal from the landmark deal, and in response to Europe's sluggishness in facilitating Iran's banking transactions and oil exports, Iran has been gradually moving away from its nuclear commitments since May 2019.

Lavrov said that Russia will do everything so that no one can destroy the agreements that are enshrined in the JCPOA.

If this plan does not fit into the logic of the current U.S. administration, or if it considers this plan a bad deal, then it is its own business, he said.

"But Washington does not have any right to punish Iran by speculating on the authority of the UN Security Council and essentially manipulating the Security Council, and to a certain extent the UN secretariat," Lavrov said.

He said he could not vouch for the position of other members of the JCPOA, above all its European members, which are under tremendous pressure from the United States.

But those who would like to support the United States or try to partially help Washington have no legal arguments, which is obvious to all, Lavrov said.

The Trump administration has openly set the goal to bury the JCPOA, Zarif said during the news conference.

The United States has not only violated international law, but is also exercising pressure on international organizations, he said.

Iran keeps its obligations assumed under the JCPOA, and it will not allow the use of international organizations to bury this deal, Zarif said.