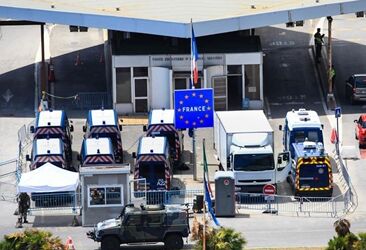 Lots of European nations, including Germany, France, Belgium and Denmark, began to relax their border controls on Monday.

German Interior Minister Horst Seehofer announced last week that controls along Germany's land borders with Switzerland, France, Austria, and Denmark would be lifted from Monday, adding that the government would reconsider its plans if the COVID-19 situation worsens.

From June 16, EU citizens and Swiss nationals can enter Germany again unhindered, without controls and without quarantine regulations, according to the federal government's decision. The decision is with a few exceptions. For example, controls for foreigners arriving by plane from Spain will not end until June 21.

The German government on Monday lifted its travel warnings for the European Union (EU) members, the Schengen-associated states and Britain, except Spain, Finland, Norway and Sweden. The warnings were replaced by individual travel advice.

According to the German Federal Foreign Office, travel warnings would remain in force or would be issued again if there were a high number of newly infected people, as currently applied to Sweden. The benchmark was a number of more than 50 newly infected persons per 100,000 inhabitants over the last seven days.

In neighboring France, travelers from countries outside the Schengen area will have to wait until July 1.

In Belgium, the authorities reopened its border to other EU members, non-EU Schengen countries -- Switzerland, Liechtenstein, Iceland and Norway -- as well as Britain.

While Belgium gives the green light to other European countries, the same does not necessarily apply in the other direction. According to the information posted online by the Belgian Ministry of Foreign Affairs, Belgians can currently only visit Germany, France, Italy, Luxembourg, the Netherlands, Poland, Sweden, Liechtenstein and Switzerland without restrictions. Non-essential travel outside the EU and Schengen area is still prohibited.

The development came after the European Commission requested member states to have their borders reopened by July 1.

Spain planned to reopen its frontiers with the EU countries -- with the exception of Portugal -- on June 21. But a pilot scheme of tourism was kicked off on Monday.

The first group of an estimated 10,900 German tourists expected to visit the Balearic Islands of Mallorca, Menorca and Ibiza between now and July 1 landed at Palma de Mallorca Airport on Monday morning.

They are the first tourists allowed to enter Spain since the declaration of the State of Alarm and the subsequent lockdown.

All the tourists had to undergo a safety and security check, which included filling in a form still in flight to give details of where they would be staying during their visit, which must last a minimum of five nights. They also had their temperature checked on arrival.

The pilot scheme is considered a trial for a wider opening of the tourist sector both in the Balearic Islands and in the rest of Spain in the coming weeks.

In addition, Greece reopened its gates to tourists on Monday, with protecting the health of visitors and locals being its top priority, as Prime Minister Kyriakos Mitsotakis has announced. International flights for tourists to Athens and Thessaloniki airports have resumed from Monday.

Italy, once hit hard by the coronavirus, recorded 26 new COVID-19 fatalities in the past 24 hours, the lowest daily increase in the country since March 3.

Along with some European partners, the country signed a contract with AstraZeneca pharmaceutical company for buying up to 400 million doses of a potential coronavirus vaccine.

The contract with the British-Swedish pharmaceutical followed a deal agreed between Italy, Germany, France, and the Netherlands in the previous days in order to ensure the availability of the vaccine in the European markets, once ready.

"Italy has not yet purchased doses of the vaccine -- which are not yet available -- but rather signed a contract to keep supporting this scientific research," Italy's Deputy Health Minister Pierpaolo Sileri told state-run RAI Radio 1 on Monday.

"Presuming to have it ready for autumn may be premature, yet it (the vaccine) could arrive by the end of the year, or beginning of 2021," he added.