BAGHDAD, June 12 (Xinhua) -- Baghdad and Washington Thursday launched an initial session of strategic dialogue with the aim of discussing bilateral ties and deciding the future of the presence of the U.S. forces in Iraq.

A joint statement on website of the Iraqi Ministry of Foreign Affairs said that senior officials from both sides held the talks in accordance with the Strategic Framework Agreement signed in 2008 between the two sides.

The session focused on the fate of the U.S.-led troops deployed in Iraq after 2014, in addition to issues of security and counterterrorism, economy and energy, political and cultural relations.

The United States pledged that it would continue reducing its forces in Iraq, according to the joint statement. 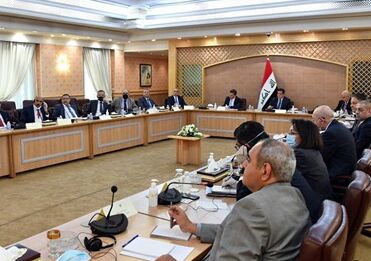 "The United States reiterated that it does not seek nor request permanent bases or a permanent military presence in Iraq," the statement said, adding that the Iraqi government in turn committed to protect the international coalition forces and their bases in the country.

Ibrahim al-Ameri, a lecturer of politics in Baghdad University, told Xinhua that there is "nothing to hide" in the government's stance toward its relations with the United States as well as other countries.

"Despite the fact that successive governments in Iraq had asked Washington to help Iraq militarily in the war against IS group, the situation is different now as the Iraqi forces have the ability to face the challenges inside the country, including countering terrorism," al-Ameri said.

"But limited cooperation in training, intelligence and fighting terrorism should remain, as well as friendly relations in other fields such as economy and culture," al-Ameri added.

For his part, Abdullah al-Jubouri, media expert in the Iraqiya University in Baghdad, told Xinhua that the United States is not really willing to entirely withdraw from Iraq because Iraq is important for the U.S. strategic interests in the whole Middle East region.

"The United States believes that its presence in Iraq is very important, because it has to face the threats of Iranian ambitions in the region, extremist groups including IS, regional and domestic impact of a divided Iraq, as well as the great power competition in the region," al-Jubouri said.

On the other hand, al-Jubouri believes that the Iraqi side in the strategic dialogue was "weak" due to the COVID-19 pandemic and the sharp decline in oil prices.

The expert said the weakness was also reflected in the division of factions towards the presence of U.S. troops.

The Iraqi parliament passed a resolution on Jan. 5 requiring the government to end the presence of foreign forces in Iraq, but Kurdish lawmakers and some Sunnis rejected the resolution and left the parliament session, al-Jubouri added.

"Under the pressure of COVID-19 pandemic, oil prices and infighting of Iraqi factions, it was hard for the government to take strong and decisive position toward the presence of foreign troops, despite the pressure of some Shiite political parties and Iranian-backed militias," al-Jubouri said.

However, after discussing the economic situation of Iraq during Thursday's strategic dialogue session, the U.S. side offered providing economic advisors to work directly with the Iraqi government to help advance international support for Iraq's reform efforts, as well as the potential for investment projects involving world-class U.S. firms in the energy and other sectors.

The relations between Baghdad and Washington have witnessed a tension since Jan. 3 after a U.S. drone struck a convoy at Baghdad airport, which killed Qassem Soleimani, former commander of the Quds Force of Iran's Islamic Revolution Guards Corps, and Abu Mahdi al-Muhandis, deputy chief of Iraq's paramilitary Hashd Shaabi forces.

Over 5,000 U.S. troops have been deployed in Iraq to support the Iraqi forces in the battles against the IS militants, mainly providing training and advising to the Iraqi forces.