NICOSIA, Aug. 18 (Xinhua) -- Cyprus and Greece have agreed on joint action at the upcoming EU meetings to deal with Turkish activities in the eastern Mediterranean, which they consider to encroach on their rights, foreign ministers of the two countries said after talks here on Tuesday.

Greek Foreign Minister Nikos Dendias paid a one-day visit to Cyprus during which he met with President Nicos Anastasiades and had talks at the Cypriot Foreign Ministry.

Anastasiades tweeted after talking with Dendias that they had "a highly productive meeting, discussing the common line of Cyprus and Greece to address the Turkish challenges and de-escalate the tension in the region." 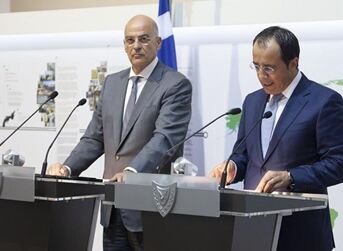 Turkish survey and drilling ships accompanied by several navy ships are currently active in areas off the east and west shores of Cyprus, prompting Greece to deploy all its navy in the eastern Aegean and in areas between Cyprus and Crete.

Turkey says that it is active either within its own continental shelf which extends to the south past Cyprus and Crete to meet Libyan waters, or in areas licensed by the Turkish Cypriot state. The state is recognized only by Ankara.

The EU has scheduled a foreign ministers' meeting in Berlin next week to discuss action being prepared by EU foreign service and a special EU summit next month to examine EU-Turkish relations.

"We consider that developments in the region will decide to a large extent the future of Turkish-European relations," said Cypriot Foreign Minister Nicos Christodoulides after talks with Dendias.

"If there is real willingness and will, dialogue can bring results... Cyprus is ready to discuss with remaining neighboring countries the demarcation of marine boundaries on the basis of international law and the United Nations Convention on the Law of the Sea of 1982," Christodoulides said.

Dendias said that Greece and Cyprus are taking and will take initiatives "which will avert fait accompli."

"The climaxing of Turkish aggressiveness is turning against EU and it has to be answered by a climaxing of European reaction to deal with it," Dendias said.