国际英语新闻:Train loaded with "Made in Austria" goods leaves Vienna for China

VIENNA, Aug. 20 (Xinhua) -- A train loaded with fibers and pulp used for textiles pulled out of the Vienna South Terminal heading for China on Thursday, marking the first time a train with goods exclusively "Made in Austria" going from the Alpine country to China.

"For the first time in the history of Austria, a local company is sending goods that are 100 percent produced in Austria directly to China by train," the Lenzing Group said in a press statement.

The train will carry 41 containers with products made by the Austrian fibers producer Lenzing with a total value of 1.8 million euros (2.1 million U.S. dollars) directly to customers in China, it said. 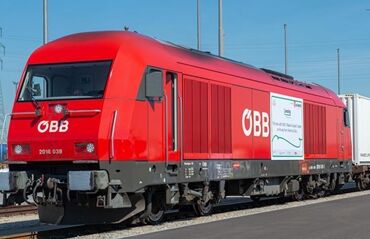 On its 16-day trip to Shanghai in East China via Xi'an in northern China, the train will cover a total of 10,460 kilometers and pass six countries -- Austria, the Czech Republic, Poland, Belarus, Russia, and Kazakhstan -- before reaching China, it said.

"With this new transport route, we can meet the high demand from our customers for sustainably produced fibers more quickly. Thanks to train transport, the urgently needed fibers arrive at our customers in China twice as quickly as by sea freight," said Stefan Doboczky, chief executive officer (CEO) of the Lenzing Group.

This train from Vienna to China is "an integral part of climate protection," said Leonore Gewessler, Minister for Climate Action, Environment, Energy, Mobility, Innovation and Technology, who attended the departure ceremony.

"Because we want to support the shift from road to rail, especially in freight transport. Today's train is the first step. I am convinced this train will set an example," she added.

"Together, we will contribute to the recovery and development of the economies of the two countries as soon as possible," said Li.