BERLIN, Aug. 25 (Xinhua) -- Before his mediation trip, German Foreign Minister Heiko Maas on Tuesday called on Greece and Turkey to discuss their territorial claims in the Mediterranean.

"A further escalation can only harm everyone, but above all those directly involved on site," Maas said in a statement released by the German Foreign Office.

"Instead of new provocations, it is now finally necessary to take steps to relax and enter into direct discussions. We want to support all of our efforts," the minister added. 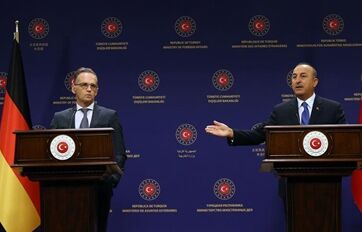 Maas made the remarks on Tuesday before he departed from Berlin. He will visit Greece and Turkey amid the tensions between Athens and Ankara over natural gas exploitation.

The dispute over Turkish natural gas explorations off Greek islands in the eastern Mediterranean has escalated in recent weeks. Greece considers the explorations illegal. The European Union (EU) has also condemned the Turkish actions and asked Ankara to stop them.

The Turkish government on the other hand believes the waters, in which natural gas is being drilled on a trial basis, belong to the Turkish continental shelf.

"Turkey and Greece are our NATO allies. Solutions to the disputes over the natural gas reserves in the Eastern Mediterranean can only be found based on international law and in honest dialogue with one another," Maas emphasized before his departure.

EU foreign ministers will hold an informal meeting on Thursday and Friday in Berlin, during which relations with Turkey will be discussed.